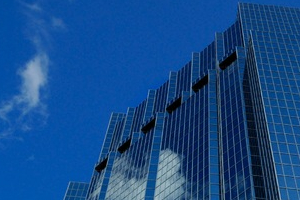 Purpose of Commercial Film for Glass

When you see most large commercial buildings, or even smaller ones, they typically require one thing: privacy. Of course light and heat protection are important, but being able to work efficiently without distraction is essential. This is why you always see large high-rise buildings with reflective glass that you cannot see through. You can get this same effect on your own film for glass.

Most Popular Types of Film for Glass

Because of particular color schemes, a bronze window film is also very popular. Its shiny bronze appearance gives the correct color for the window but also provides privacy.

In addition to solar films, frosted films are very common. These will typically be installed on the inside glass of office buildings, such as conference rooms, cubicles, etc. Many times, designs and logos will be cut out of the film to give the interior a sleek, branded look. White frost is the most popular, but frost is available in many other colors as well, including bronze, silver, and grey.