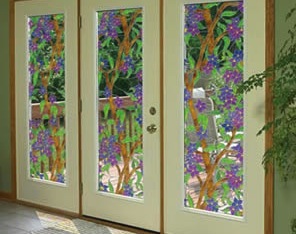 Decorative Window Film not only reduces up to 99% of damaging UV rays, but comes in a variety of patterns and colors that will enhance any home or office. Decorative window film is compatible with standard clear windows including single-pane, dual-pane, and removable storm pane windows.

Decorative Window Tinting Films come in a large array of designs and patterns. They can be used to enhance your home or office in addition to providing privacy. Check out our selection of films by clicking below:
https://www.windowtint.com/pages/decorative-window-films

Some of the more practical attributes for its use is its ability to reduce glare. In addition, many films help to block UV rays; up to 99%. This makes them ideal for windows where the sun comes in the most, and may interfere with TV or computer screens. For these same reasons, it is also an excellent reason to use them on office windows. Such films also tend to be insulating, keeping out the cold and helping keep your home or office efficient.

For decorative purposes, there are many beautiful decorative window film designs you can choose from that, if placed on a front window or a mirror, can really enhance your home or office decor. It can even be found in many colors, as well as the frosted window film varieties.

Application of decorative window film is fairly easy; just be sure that the surface it is to be applied to is clean and free of dirt and dust. You do not need any special tools or equipment.