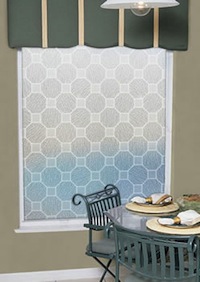 It’s sometimes a hard truth to swallow for customers, but nearly 90% of films you will find for DIY install have adhesive on them. Because of the high quality of adhesive films, they are almost always preferred. But there are still a few options for cling film available, and this article will explain what they are and where to find them.

The majority of cling film available online is decorative. Patterns such as stained glass, trees, vines, etc. can be applied to glass to give it a great new look. There is no adhesive on them, so they can be applied and removed multiple times, quite easily. There is a large selection of cling film online here.

In addition to decorative cling film for flat-glass windows, there is cling film for automotive back windows. There are commonly seen on the road and feature designs, images and logos.

This type of product is very rare. In fact, this article should persuade you to go with a normal adhesive film instead. While the ease of installing cling film is attractive, the quality of these products is not nearly as good as standard adhesive solar films. And because they are usually never made with a metal layer, the solar ratings are much lower.

Reasons to NOT Use Cling Film

The number one reason people want cling film is that they are intimidated of the installation procedure of adhesive-based films. In reality, adhesive films apply the exact same way as cling films. Both will need a little soap and water sprayed on and a squeegee to apply. The biggest difference is that cling film can be removed easily. Adhesive film can be removed as well, it just takes a bit longer and it cannot be re-applied.

Remember that adhesive-based films are much higher quality, look better, and install just as easily.